Church UPDATE: Analogue church is back this Sunday 14 Feb so you're welcome to join us either at 9:30am or 11:30am. 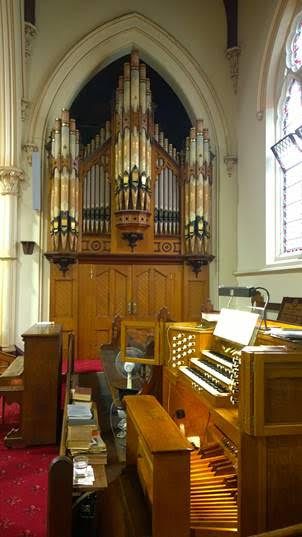 The St Kilda Presbyterian Church organ built was built in 1892 by Melbourne organ-building firm, Fincham and Hobday and is listed in the Victorian Hertiage Database. On the eastern side of the pulpit, the organ occupies a visually priominent place in a specially built adjacent chamber. The façade pipes retain their original ornate decoration (diapering or stencilling). Behind these are several more ranks of pipes made of metal and wood, comprising 31 speaking stops over three departments, Great, Swell and Choir. The larger pedal pipes are at the rear and around the wall inside the chamber.

Most of the 31 stops on the Fincham and Hobday organ are complete ranks of pipes. Each rank has its own tonal character like flutes, piccolos and clarinets. They offer the organist a variety of instrumental sounds chosen by selecting the draw stop knobs on the console. Originally having 27 stops and tubular-pneumatic action, four stops have been added. In 1955 the action between the console and the pipework was electrified and a new draw stop console was installed in its present position. A Fincham company catalogue photo from around 1900 shows the previous tubular-pneumatic console located closer to the organ pipework. Two gas lampstands, before electric lighting, can be seen there too. This photo and other details about the organ can be viewed at the Organ Historical Trust of Australia's page.

Before electricity was common, organs were often hand-pumped. Larger organs like this one at St Kilda Presbyterian Church, had a water-driven engine to operate the bellows. Records suggest that hydraulic pressure may not have been sufficiently reliable as the church building is sited at the top of Barkly St hill. An electric blower was installed in 1907. Currently, a more efficient, cleaner and quieter electric blower supplies wind from inside the organ chamber. The organ pitch is close to A=440 during winter and approximately A=443 in the warmer months.

The organ is currently maintained by Wakeley Pipe Organs and played regularly by our organist Tim Baker to accompany Sunday congregational singing. Visits are always welcome, please make an appointment via the contact page.

Sharing the meaning and grace we find in Jesus